Man Ticketed For Tethering His Cat 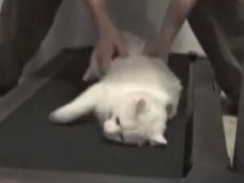 A man in LAFAYETTE, Colo.  was ticketed on Wednesday March 14th for tethering his cat to a rock. The Colorado man took his cat for a jog at the park and when the cat refused to run, he tied the cat to a rock. A person passing by called the police when they saw the cat.

The man was issued a ticket for suspicion of "domestic animal cruel treatment," which is a municipal offense. A city ordinance prohibits any kind of tethering. The cat was not injured so it was released to it's owner, 19-year-old Seth Franco.
Posted by Concerned American Citizen at 7:48 AM